To be #1 you need; Accuracy and Speed together 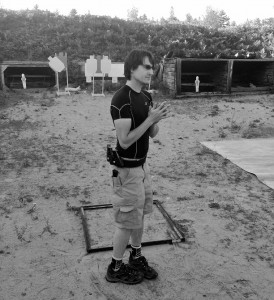 Getting the most points in this game is not always a guaranteed winner, it takes speed and accuracy.  And that was the theme for tonight’s mini match designed by Mark Donner.  Low round count, minimum reloads, and limited movement would mean that hitting the targets accurately and fast would give you the winning combination.  In IPSC scoring; speed plays a greater part in the overall score, with accuracy second and power factor last.

On Stage 1 “The Slots” you were challenged with 8 paper targets, surrounded by 4 no shoots and some hard cover (only half of the target would score).  In addition 5 plates on the Texas Star closed the shooting with a total 21 rounds.  With a 10 round magazine limit, if all went well you would only needed 1 reload.  The added challenge was that you were shooting from behind barrier walls with only 8 inch gaps to see your targets.

Stage 2 slowed things down by forcing you to shot 3 targets free hand (using both hands) and 3 targets strong hand (using only your draw hand).  With a round count of 12 you were in for at least one magazine change.  To add to the challenge there was a no shoot in the middle of each 3 targets.  This design is an Ontario classifier and when shot and scored officially is used to rank the shooter against all other ranked shooters in Ontario.

“Too Close for Comfort” was the 3rd stage which again placed the emphasis on accuracy by placing 1 no shoot strategical in front 1 target and 2 no shoots in front of the other target.  For the final target hard cover again gave you less shooting area.  A couple of small poppers were thrown in the mix to make the round count 8, giving you a few extra rounds for those of us that miss here and there.

After the dust had settled a veteran shooter came out on top, Butch was able to combine accuracy and speed in order to lead the Action Shooting Team atop a total of 6 shooters.  Henry had a top placing on Stage 2 edging out the competition by having the best accuracy.  A notable for the evening was the introduction of a new gun by Dale, in the form of a Springfield XDM 5.25, which proved to function exceptionally well.  Maybe with a little tuning and practice he can chase Butch for a run at the top spot.

Scores are posted and can be accessed by clicking the SCORES button above or from this link.

The Action Shooting Team will be back in action this weekend with Bud and Butch traveling to Mancelona and Houghton, while Steve and Dale will be shooting the PSA match on Sunday.