The Michipicoten Rod & Gun Club in Wawa is held their 26th Annual Blackfly Shoot on May 29th and Algoma Rod and Gun Club had great representation.  The event is composed of four events using handgun, shotgun, centrefire and rimfire rifles.  Handguns are shot at “groundhogs (2x4s about 8 inches high sitting on posts from about 15 to 40 feet); rimfire rifles at swinging targets, centrefire at 100 yard targets off hand; and shotguns at pairs of rabbits and teals (clay pigeons bouncing on ground and in the air across and away from the shooter).  The club put on a great event with raffles and burgers after the shoot.  The main draw was for an SKS brought up by Perry’s.  ARGC fielded two teams and placed first and second.  The team of Mark Donner, Barry Sparrow, Mike Oliver and Derek Sibenek took first place unseating the prior years winners, Perrys, pushing them down into 2nd place.  Thank goodness they couldn’t hit clay pigeons.  Perry’s team consisted of Reg Perry, Jane Perry, Lana Perry, Bud Gagnon and Gord Strachan.  Thessalon and Nottingham North also fielded teams.  As winners we take home the Blackfly plaque which we now have to buy a shield, engrave it and mount it. Once done we will hang it in the clubhouse.  This is a great event and highly recommended to all! 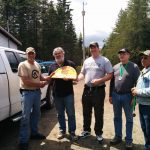 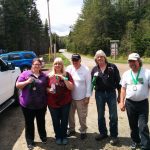 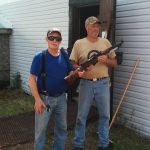 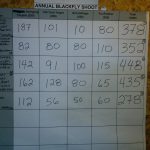